Law360 (December 15, 2021, 9:16 PM EST) — A restaurant operator urged a Michigan appeals court Wednesday to consider a layman’s understanding of “direct physical loss or damage” when determining whether its insurance should cover losses from pandemic-related shutdowns, comparing the phrase’s meaning to temporarily taking a toy away from a child. 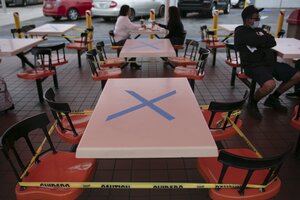 Policyholders have sought to try their luck with state courts in arguing that the COVID-19 pandemic and related shutdown orders caused physical damage that would warrant insurance coverage. (AP Photo/Jae C. Hong)

Arguing for restaurant operator Gavrilides Management Co. LLC, Timothy Burns of Burns Bowen Bair LLP told the appeals panel that, under a layman’s reading, “direct physical loss or damage” can include the temporary loss of use of a property. The meaning of that five-word phrase is at the crux of Gavrilides’ coverage dispute with Michigan Insurance Co., as it has been in hundreds of similar COVID-19 business interruption cases nationwide.

“I’ve actually known the meaning of that term, and that term included the temporary deprivation of property by civil authority, since I was 5 years old,” Burns said, likening the situation to his mother temporarily taking away his toys as a child.

“Now, my mom didn’t mean she was going to take a sledgehammer and structurally alter my toys. She didn’t mean that she was going to permanently dispossess me of my toys,” he continued, arguing that loss of income due to state government shutdown orders constitutes a direct physical loss in Gavrilides’ policy with Michigan Insurance.

The three-judge panel should read the insurance policy like an ordinary person would and mandate coverage, Burns said.

Gavrilides appealed a lower trial court’s July 2020 decision holding that there had to be tangible, physical damage to its properties to trigger coverage. The pro-insurer decision marked the first time any court had decided a COVID-19 coverage dispute on the merits. Gavrilides has now asked the state court of appeals to vacate the trial court’s ruling and remand the case, allowing the operator to amend its original complaint.

If permitted to amend, Gavrilides would also plead direct physical loss due to separated tables and other mitigation measures for in-person dining, along with the likelihood of the novel coronavirus in the air, Burns said. Gavrilides had only originally pleaded loss of income due to the state closure orders.

A large part of the three-judge panel’s attention Wednesday focused on a separate virus exclusion in the policy, which bars coverage for “loss or damage caused by or resulting from any virus, bacterium or other microorganism that induces or is capable of inducing physical distress, illness or disease,” according to policy language included in the appellate briefs.

Because “loss or damage” only refers to physical loss or damage to the property and does not extend to Gavrilides’ loss of income, the exclusion is thus inapplicable to the case, Burns argued. If Michigan wanted to totally exclude coverage for viruses, it should have broadened its language like it did with other exclusions, he said.

Regardless of the virus exclusion, Burns stressed it was “absolutely critical” that the panel issue a ruling on the direct physical loss or damage provision.

Michigan Insurance, for its part, reiterated that Gavrilides had to show tangible damage to the property in order to trigger coverage, adding that the court cannot hold the insurer liable for a risk that it did not assume to begin with.

“Every hospital in the country has COVID-19 in it. And every hospital is being used to its purposes,” Wilder continued. Just because the restaurants were specifically barred from indoor dining, it doesn’t mean they couldn’t have been put to other uses, he said.

“The idea that there’s some physical loss of or damage to the property because of this virus is just untenable,” he added, arguing that it would be futile for Gavrilides to amend its complaint.

Counsel for Michigan Insurance did not immediately respond to Law360’s request for comment.

“I thought the court was well-prepared, thoughtful, and polite, and recognized the importance of the case. I was very impressed by the amount of time they allowed for argument and the patience of the judges,” Burns said of Wednesday’s oral arguments in a statement to Law360. “They let me say my piece and had penetrating questions. A lawyer can’t ask for much more.”

Since the trial court’s ruling in July 2020, policyholders have sought to try their luck with state courts in arguing that the pandemic and related shutdown orders caused physical damage that would warrant coverage.

According to Law360’s COVID Insurance Case Tracker, federal courts have permanently thrown out approximately 41% of the 1,304 cases policyholders have lodged against their insurers seeking COVID related coverage as of Dec. 7, while 17% were voluntarily dismissed and 40% remain ongoing.

Sign up with your email address to receive news and updates.

This site uses cookies. By continuing to browse the site, you are agreeing to our use of cookies.

We may request cookies to be set on your device. We use cookies to let us know when you visit our websites, how you interact with us, to enrich your user experience, and to customize your relationship with our website.

Click on the different category headings to find out more. You can also change some of your preferences. Note that blocking some types of cookies may impact your experience on our websites and the services we are able to offer.

These cookies are strictly necessary to provide you with services available through our website and to use some of its features.

Because these cookies are strictly necessary to deliver the website, refuseing them will have impact how our site functions. You always can block or delete cookies by changing your browser settings and force blocking all cookies on this website. But this will always prompt you to accept/refuse cookies when revisiting our site.

We fully respect if you want to refuse cookies but to avoid asking you again and again kindly allow us to store a cookie for that. You are free to opt out any time or opt in for other cookies to get a better experience. If you refuse cookies we will remove all set cookies in our domain.

We provide you with a list of stored cookies on your computer in our domain so you can check what we stored. Due to security reasons we are not able to show or modify cookies from other domains. You can check these in your browser security settings.

These cookies collect information that is used either in aggregate form to help us understand how our website is being used or how effective our marketing campaigns are, or to help us customize our website and application for you in order to enhance your experience.

If you do not want that we track your visit to our site you can disable tracking in your browser here:

We also use different external services like Google Webfonts, Google Maps, and external Video providers. Since these providers may collect personal data like your IP address we allow you to block them here. Please be aware that this might heavily reduce the functionality and appearance of our site. Changes will take effect once you reload the page.

The following cookies are also needed - You can choose if you want to allow them: